Gig economy jobs are becoming increasingly popular these days. While it may appear that the buzz with such jobs is recent, it actually is not. Non-traditional workers have always existed in the world economy. If gig economy jobs are making a comeback now, it is only because of their benefits for both the workers and the economy.

What are gig jobs? A gig job (also called a gig economy job) refers to jobs outside the traditional office setting. Thus, gig workers work not for one company but perhaps for several, allocating their time to the different tasks simultaneously. Gig jobs are short-term, paid mostly per hour, and could require one to register as an independent contractor on gig platforms. Independent contractors work in a variety of spaces. Thus, from running errands to freelance writing, these workers render their services and earn money in the process.

At the moment, there are tens of thousands of gig workers scattered across the globe. These workers believe that the terms and conditions of gig work are compatible with their personal finance philosophies. Beyond that, the gig economy does not make any distinctions between men and women, allowing them both to grow their bank accounts and earn money in the process.

This article looks at some of the best gig jobs you could try as a beginner or even as a seasoned gig worker. Ready to start earning? Let’s dive in!

Why Choose a Gig Job?

Gig workers often turn to gig economy jobs to make extra money. However, besides having some more money in your bank account, there are other reasons gig economy jobs are becoming wildly popular. Here are some of them.

Typically, you will not have to jump through hoops to find gig economy jobs. Unlike regular jobs where you have to send in applications even to be considered, you can find gig jobs on the many freelance sites that exist. You need to sign up on any of these apps to set up your own freelance business.

Furthermore, the requirements to apply for jobs are not so strenuous as regular jobs. Job listings require you to pitch in most cases. However, you can get to negotiate your pay with clients individually. What you get paid per hour might differ from one client to the other.  More so, highly skilled freelancers get to earn much more than others.

One other reason you should be considering taking up a gig economy job is the level of flexibility that comes with it. You can decide when and how long you can work for in most cases. You can also decide how much money you make within a period by either increasing or decreasing the jobs you have going. While with regular gig economy jobs, it might be difficult to increase your salary except through a periodic promotion. However, for gig economy jobs, you can make more money simply by doing more jobs.

One thing gig economy workers enjoy above regular workers is access to various jobs within a given period. This deals with the drudgery that comes with doing the same jobs over and again. With a gig job, you get to create your own schedule and choose the jobs you want to take. The great thing is that you could get interesting jobs the more time you spend in the gig economy. So not only will you be making cool cash, but you will also be having fun while at it.

There are many gig economy jobs you can try your hand on. Many will require you to be an independent contractor to have full control of your schedule. However, as stated in the beginning, it is possible to make some cool bucks with a gig economy job, regardless of what your personal finance philosophy is.

Freelance writing has always been a trusted way to make money. Hence, it is not surprising that it is the first gig economy job on our list. Freelance writers have a myriad of niches to choose from. You could become a fiction writer, copywriter, or write articles even. In some cases, you can make extra money from writing advertisements and website copy for businesses. The important thing is to be great at writing, you can always find gig work as a freelancer. The best part is that you do not even have to resign from your day job to take up freelancing. It also takes blessedly little to begin. With a device with an internet connection and an active imagination, you can get on online platforms where you will find clients.

Speaking of online platforms, there are different gig economy apps you can sign up on to start your freelance work as a freelance writer. The popular ones include Fiverr and Upwork. When you register on any online platform, they may have to run a background check to confirm that the details you provided are legit. Do understand that the more talented you are, the more money you stand to make as a gig worker.

Virtual assistants are freelance workers who have perhaps the most demanding skill sets. As a virtual assistant, you will render the services of a regular assistant, the difference being that your job will be mostly virtual. Thus, you will carry out such tasks as scheduling flights, fixing meetings, making social media posts. The extent of what you have to do could expand considering that you will be carrying out most of the jobs online. However, you will not be expected to do menial tasks.

Being a virtual assistant is one of the best gig economy jobs to take on because it just demands that you have a stable internet connection and great organizational skills. Freelance workers who work as virtual assistants often earn more than the average minimum wage in most countries. In addition, it is freelance work that allows you to do other things. For example, as a virtual assistant, you could run an online business, splitting your time perfectly between the two.

Drive for Uber or Lyft

Another relatively easy gig economy job to begin is becoming a ridesharing driver. A number of things make the job attractive. The first is its low barrier to entry. As long as you have a reliable vehicle, mostly your own car,  a valid driver’s license, a clean driving record, and do not mind a background check, you are good to go. Some ride-sharing platforms require drivers to have car insurance and health insurance too.

Furthermore, there is a high degree of flexibility with being a ride-sharing driver. You could even still maintain your full-time job and only take on passengers in the evening or on weekends. These platforms typically do not have rigid rules regarding how many hours their drivers have to put in.

Finally, there is no shortage of clients for ride-sharing drivers. Thousands of drivers use ride-hailing services every week.  The income potential here is hence amazing. This in turn means that you will hardly run out of money; your checking account will always have money. some of the best platforms to explore include Uber and Lyft.

If you love pets, pet sitting is one of the part-time jobs that can take advantage of your skillset perfectly. In some cases, you can get to earn as much as people who have a full-time job. Even if you do not make that much, consider pet sitting as one of the ways of making supplemental income, regardless of how much you currently make.

In addition, you do not need to be a personal finance nerd to start making money through this route. You need to love pets and have the time to pet sit.

More so, you can agree to do more than pet sitting and include pet walking as part of the services you offer. Some folks do not have the time to walk their pets to meet the required daily exercise their pets need to reach. You can choose to offer your services in that regard.

You can sign up on Rover to find potential clients. Then, if you are lucky, you could end up with regular customers who will give you regular gigs just like regular babysitting jobs.

One of the gig economy jobs that is gaining traction in recent times is running errands. In the arrangement, the individual or business sends you to run errands for them for average pay. In this niche, the highest-paying kind of errands is delivering food and groceries.

Small business owners regularly partner with delivery companies, who then hire employees that do deliveries. Thus, when someone orders food (or groceries) from any of these sites, the business has the delivery company deliver the item using one of their errand people. This is one of the financial relationships that benefit everyone. For the delivery person, it gives them a high level of flexibility, allowing them to earn per hour. Some of the sites where you can register as a delivery person include Doordash, UberEats, Postmates, etc.

Digital marketing is becoming a huge deal, especially for online business owners. As a result, there is a high demand for people who know how to convert sales. If you have skills like how to run Facebook and Instagram ads, Seach Engine Optimization (SEO), and even social media handling, then you should be considering using your skills to earn money.

Making money through freelance jobs in digital marketing is not difficult. However, as already mentioned, it is a niche-specific area, which means that you need to have the skills required to compete favorably.  More so, you may need to garner experience before you get to make a lot of money through digital marketing.

If you are starting out, you may want to check out some of the jobs on platforms like Upwork or Fiverr.

It is safe to say that if you are good with graphic design, you will most likely never run out of jobs. You can work with specific companies, making flyers, and do any other job that requires graphic designing. However, you can also have graphic design as your main gig job. If you are a web developer you are even in a better position to negotiate.

On sites like 99Design and CrowdSpring, gig workers whose specialties is graphic design make good money once they start accepting jobs. Of course, the better you are at your job, the better your pay will be. Once you have the required skills, graphic designing is one of the best gig economy jobs you could take up.

If you are looking to take up a job in the gig economy, you are on the right path. The possibility of making good money, getting rid of the hassles of full-time jobs, and maintaining a flexible schedule are great attractions. More so, there are different gig economy apps that ensure that you do not have a shortage of clients in need of your services. Really, you do not need to be a personal finance expert to know that you benefit more from gig economy jobs.

This article has looked at some of the best freelance jobs to consider. We have also suggested some platforms and companies to check out. The companies mentioned all have built the reputation of being reliable. 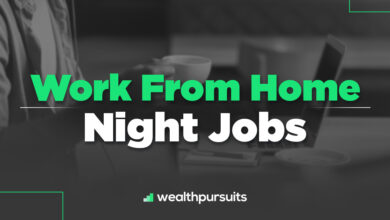 Work From Home Night Jobs – 5 Top Picks to Apply For